Held to a Higher Standard 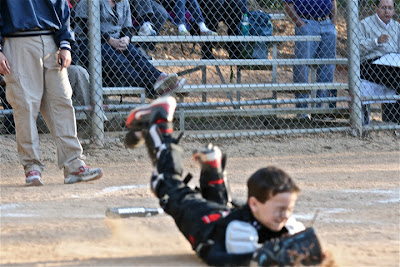 First things first. Let me set the stage for this diving catch. This is a picture of Asher "Stones" Lucas. He plays on my nephew's baseball team, the West Raleigh Mudcats. It is a "coach pitch" team comprised of six, seven and eight year olds. Yes, Asher is 7.
This play was actually caught on film by Erin Hautop, one of the team moms (and unofficial team photographer).
Asher made a diving play on a pop foul, complete with a dirt-in-the-mouth face plant. Not only did he make the catch to record the out, but he popped up, ready to make a throw. This was clearly an amazing play for a player of any level.
The West Raleigh Exchange Club sponsors one of the most competitive baseball leagues in the area. Hundreds of kids try out but not everyone makes a team. For those who do, here are some things they are taught (which I witnessed first hand while watching their last game).
1. They hustle. The coach gathers the team in between innings outside the dugout. As the players leave the dugout, they are expected to run to their team huddle. If not, coach makes them go back to the dugout and run back out. They ALWAYS run to their respective positions in the field.
2. They respect ALL players. They cheer on their own team and they cheer on players from opposing teams who make good plays.
3. They learn the fundamentals. I am seriously impressed by their knowledge and comprehension of baseball situations. They back up throws, they field, throw and hit with superb technique.
4. Parents are held accountable too. If a parent is determined to be "unruly" from the stands, their child is asked to leave the game, not the parent. Talk about incentive for setting a good example?!
But one of the coolest things I saw actually happened during an injury. (that sounds bad, hear me out) One of the players on the Mudcats hit a hard line drive that took a bad hop and hit an opposing player in the shoulder. When play stopped, a timeout was called. Every player in the field immediately took a knee. Every player in the dugout came out of the dugout, lined up in a single file line, took a knee, and waited patiently while the coaches attended to the injured player. I got chills. It was one of the most respectful displays of sportsmanship I have ever seen. The injured player got up, dusted himself off, and every player clapped.
Some people have criticized this league for being "too competitive" or "too serious" for boys at such a young age.
What I saw that day was something quite different. These boys are simply being held to a higher standard and they are having a ton of fun doing it! Frankly, if we are still looking for athletes to be role models, these boys have a serious head start. 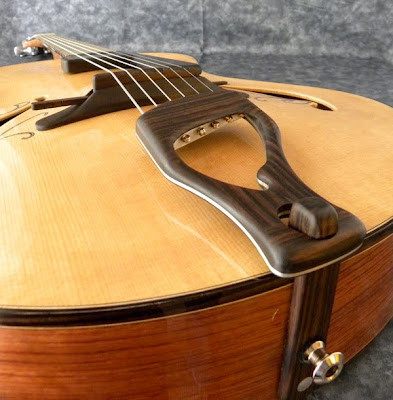 I have a new obsession - handmade guitars. Now, for those of you who know me, you know that my guitar playing ability is limited to the opening 3 notes of Typical Situation, the Unforgiven and Free Fallin'. Not exactly a killer set list if I can only fumble through 9 seconds of music on someone else's guitar.
I have had the pleasure of working with Clay and Michelle Conner to find a home in Raleigh. Clay is the owner of Clay Conner Guitars and handcrafts some of the most exquisite guitars I have ever seen. I am having a somewhat unhealthy obsession with it for a guy who can't play music (but may be motivated to learn).
Even more than musical instruments, though, I have realized I am completely enamored with the amount of people in my generation who still place such a high value on handmade goods. Check out Victor and Sarah at Raleigh Denim where they make jeans on vintage sewing machines or Evan Lightner who designs furniture that will someday be seen at MoMA. I live in Raleigh, North Carolina and I am surrounded by artists, craftsman, and -dare I say- innovators.
What an interesting dynamic... people in older generations are overwhelmed by the amount of technological innovation we uncover everyday, while I consider innovators to be people my age and younger who still take the time to learn a trade or a skill and hone a craft.
The Handmade Market is coming up on May 12 in downtown Raleigh. Hope to see you there!
I'll be the guy who is admiring the guitar he can't play, the handbags he doesn't use and the jewelry he won't wear.

The reply all email can be quite handy...except when it is an accident. How about when it is a worldwide accident? (A friend) works for a local division of one of the largest ad agencies in the world. It operates 450 offices in 120 countries with approximately 18,000 employees.

I happened to be with (my friend) when a string of emails came through from around the world. 120 to be exact. All with the same subject line.

(The sender) wrote a one line email asking a colleague for someone’s contact information. And accidentally copied the entire company. All. Over. The. World. The first few responses came through as you’d think...

“Sorry, I don’t think I was supposed to be on this email”

But those people also hit reply all. They were in France. You get a few more emails from another country like this...

“Please do not hit reply all.”

Then you get the e-yellers...

“DO NOT HIT REPLY ALL! YOU ARE CLOGGING MY INBOX”

(yes, they hit reply all as well)

Then you get the person who starts having fun...

“Headed for coffee, anyone want some?”

Then you get the know-it-all, who literally takes the time to type step by step instructions on how to remove the shortcut email for the entire company list serve. Thanks for that productive move.

Now here is the moment of truth. This is an opportunity beyond belief - to build and strengthen a world wide culture. What would happen if this email just ran it's course? Imagine the CEO sends out a 30 second iPhone video in response to the email chain. Imagine the President of that particular office gives an award to the guy who made the mistake, and then every other division gives out that award to a person who makes an epic (non-damaging) mistake. Imagine this day becomes know as “reply all” day, or just think of how funny it will be in two weeks when someone opens the email and replies to everyone and restarts the fun.

But instead? *sigh* The following email from the desk of the messaging manager:

First of all let me apologise for the full inboxes you've experienced this morning from a bulk internal email. It was sent as a simple human error to you all. We've put filters in place to stop the delivery of these messages so things should now have calmed down for you.

Could I insist that you all refrain from replying to all should anything like this happen in the future? Replying to everyone asking people not to reply-to-all is only exacerbating the problem and completely counter-intuitive. Doing so puts a huge strain on our email servers and delays important client communications. Continued abuse will result in you being locked from (our company's) mail system.

Please report any future incident to you local IT department and they will escalate to the relevant parties.

He said, she said: Rainy Days

Whenever I need inspiration or blog topics, I ask my friend Jenn Cole who blogs at www.noplacelikehere.biz. You should check her out.
Today, we decided to pick a topic - Rainy Days - and both write about the topic. Hence, the title he said, she said. Here is what she said.
Rainy Days confuse me.
You know what I have never been able to figure out? Why do I feel most productive on days it rains? It doesn't make sense. And back when I worked on-site with Beazer Homes, the rainiest days were some of our busiest days. I don't get it.
Also confusing - that song by Bob Dylan Rainy Day Women #12 & 35 . What? What the hell kind of song title is that? He sings about people being stoned which probably says alot about the choice.
You know what else confuses me about rainy days? Why do we keep telling brides that rain on your wedding day is good luck? Ha! Rain on your wedding day is miserable. Can't you just appreciate the fact you are getting married and enjoy it? Why perpetuate the lie? Do you need justification for being happy on your wedding day regardless of the weather? Good luck.
As I write this, I realize it is coming across a little angry. It is probably because Jenn just bought me coffee and I don't normally drink coffee in the afternoons. I feel a bit like Will Ferrell in Kicking and Screaming.
Okay - it stopped raining. So I will stop writing... it is not going well.

Last week, we got to ring in the new year with some very special friends. We were visiting my hometown of Kingston, NY with 3 kids and 8 adults and stayed in a beautiful old farm house (part of the home was 200 years old).
One of our friends, Andrés, is originally from Columbia, where they have some very symbolic New Years Eve traditions. This is the first year he has not been in Columbia for New Years Eve so we wanted to help him feel a little more at home. Here is my experience:
Tradition 1. Wear yellow underwear. It is said to bring wealth and prosperity in the coming year. Well, I don't actually own any yellow underwear so I left it up to my friends to pick some up at the store while they were out shopping. Everyone had a good laugh when I opened the bag to find yellow Flash Gordon superhero briefs. Ha ha ha, joke's on me. The REAL funny part came when we all realized they bought the wrong size. I haven't fit in a 28 waste in two decades. But I tried...for the cause. And no, there are no pictures.
Tradition 2. JUMP! At the stroke of midnight, we were all standing on a chair (or couch) and we jumped down to the floor. This was to help us take on 2012 with momentum and energy.
Tradition 3. The suitcase run. After we jumped down and kissed our loved ones, we each grabbed a suitcase and ran around the outside of the house. This tradition ensures good travels in the coming year. Not sure if it meant anything significant but my wife and I held hands while we ran, hopefully that means we can go somewhere together.
Unfortunately we could not find any grapes with seeds because there is one more tradition we tried to uphold. But since we couldn't pull that one off, we substituted with a few American traditions...we drank Champagne and watched Dick Clark's New Year's Rockin Eve.
Nappy New Year! 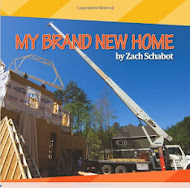 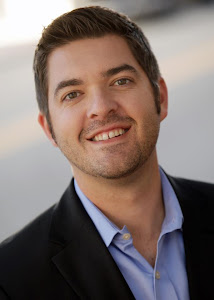 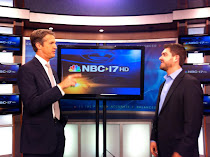